The NAA is the Supreme Audit Institution (SAI), which had never existed in the previous decades. The encouragement of this institution’s establishment is to contribute to the RGC’s Reform Programme in all sectors to promote good governance, and achieve sustainable development, equality, and poverty alleviation. This encouragement was initiated with strong commitment of the RGC, NA, and Senate in 2001, which was the 3rd year of the 2nd mandate of RGC.

The National Audit Authority, abbreviated in English as “NAA”, is the public institution which is independent in its operation and was established under the Law on Audit of Kingdom of Cambodia promulgated by Royal Kram No. CS/RKM/0300/10 dated on 30 March, 2000.

​According to the Law on Audit of Kingdom of Cambodia, the NAA has the right to examine all financial statements and performances of the RGC. The summaries stated in this Law from Article 14 to 17 indicate that the NAA:

The NAA is empowered to conduct the audit on management institutions such as ministries, institutions, agencies, authorities, national bank, state financial institutions, state and private sector joint venture financial institutions, public enterprises, public establishments, municipal, provincial and local government offices, contractors, suppliers of goods and services to the RGC under contracts and other organizations receiving financial assistance from the RGC in addition to their own equity and credits such as tax and duty exemptions and other concessions to non-profit organizations and private investment enterprises.

During the previous years operation, the NAA has made major achievements by contributing to the improvement of the RGC’s Reform Policy in public financial management.

Realistically, the NAA, in legal aspect, turned out its history by starting the public auditing operation in early 2002. For the past years, besides the administrative management and human resource capacity development, the achievements in terms of the audit products showed that some negative points were started to improve and strengthen by most of ministries-institutions and audited entities according to their capabilities from year to year with accountability. In addition, the NAA has developed some of legal documents with the support and cooperation from local and international Development Partners (DPs) aimed at helping the NAA to become a standardized and internationally recognized institution. More importantly, the NAA has established its public auditing standard in accordance with the existing law and standards.

The achievements of the NAA’s operation will be a historical document for reference for auditors as well as ministries, institutions and audited entities to do their study and research. On the other hand, these results will help to coordinate the relationship between auditors and audited entities to foster better and closer cooperation. Moreover, these results are an essential and strategic component to support public auditing in Cambodia in strengthening itself to fulfill the tasks for the country efficiently.

For 10 years, besides the audit work which is the core responsibility, the NAA has been trying to build and implement other tasks to strengthen and ensure the continuity of the institutional work.

NAA has conducted the audit in the following types:

Meanwhile, NAA has been conducted pilot audit by using TeamMate as some countries. Using this program assists the auditor to perform audit work efficiency and timely. 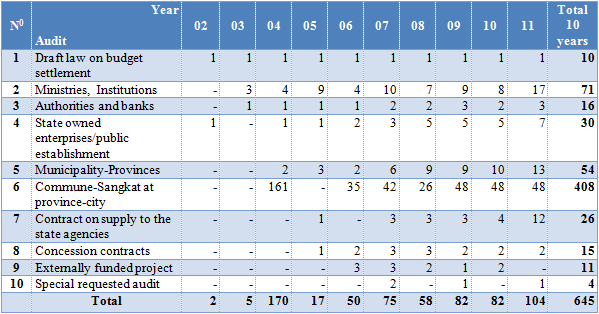 Under the support of German Corporation of International Cooperation (GIZ), the NAA had formulated the SDP (2007-2011) mainly focusing on 4 objectives, 77 programmes and 177 activities, which was carefully and sequentially implemented by the NAA with success and great outcomes.

This handbook was initiated together with HRM Handbook under the support of GIZ Programme aimed at providing new knowledge and efficiency to auditors at the NAA in strengthening the quality of the audit and as a basis for the institutional development.

The development of this guideline complies with Article 29 of the Audit Law of the Kingdom of Cambodia which states that “the report issued by the Auditor General shall be deemed to public documents” and Article 37 to 39 stated about confidential information which should not be published. The guideline illustrates the methods to publish the result of audit including the weaknesses of management of ministries, institutions, municipal, provincial and local government offices.

For 10 years, besides the conducting the audit, NAA has prepared and developed some research documents related to the auditing skills as follows:

At the same time, NAA is preparing some necessary audit guidelines as follow:

With the cooperation from DPs, NAA pays close attention to the Information Technology (IT), which is important for audit works, as follows:

The NAA established a library in 2003 by researching and maintaining books and other important documents for auditors and specialized staffs to do research and get acquainted about the audit achievements each year.

The cooperation with both national and international institutions is an important strategy to support effective audit operations and also to comply with policies and reform programs of the RGC as well as to be consistent with on-going development of both regional and global SAIs.

For cooperation with national institutions, such as legislative and executive bodies, the NAA has participated in the meetings with the representatives from the government, the NA, and the Senate regarding to audit, national economy and public finance sectors.

A member of INTOSAI and ASOSAI starting from the collection of SAIs to strengthen audit principles, audit standards and provide experience through the study tour, training and cooperation the external audit sector to contribute the security of conformity with international standards.

In the following years, the NAA intends to

With the support of foreign Supreme Audit Institutions and development organizations the NAA will complete the guidelines and manuals needed for an effective audit work, such as Compliance Audit Guideline, Financial Audit Guideline and Performance Audit Guideline. The NAA will continue in implementing the HRM Handbook into the daily work and improving the comprehensive auditees database and the follow-up system. Moreover, the NAA will try to speed up the audit work and develop methods to increase the efficiency of its audit work. Last but not least, the organization of the NAA will be strengthened by installing a record center and by completing the IT system including an internal communication tool (Intranet).

The aim of the efforts of the NAA and its development partners is to shape the NAA into a well-recognized supreme audit institution and to become an effective partner of the NA and Senate and the RGC in bettering the living conditions of the citizens of Cambodia.